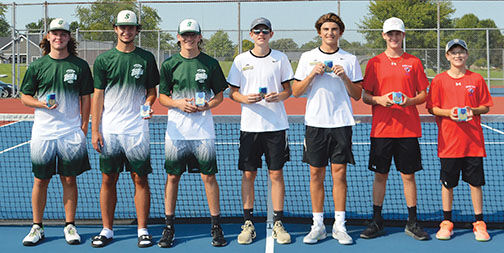 Jake Good of Randolph Southern was the top performer at the No. 1 singles at Saturday’s County Meet at Union City. Good has now bagged three county championships, two in singles play and one in doubles play. The county teams will now turn their focus to the second half of the season and the sectional, which is held at Jay County. 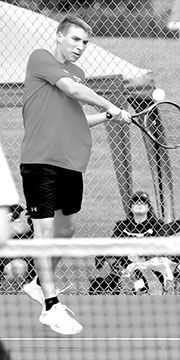 Jake Good of Randolph Southern was the top performer at the No. 1 singles at Saturday’s County Meet at Union City. Good has now bagged three county championships, two in singles play and one in doubles play. The county teams will now turn their focus to the second half of the season and the sectional, which is held at Jay County.

In a three-way battle for Randolph County bragging rights, the 2021 Randolph County Tennis Tournament held at Union City featured the team with a long tradition of success (Winchester), a red-hot team that had won eight consecutive matches (Union City), and the defending county champs (Randolph Southern).

At the end of the annual round-robin intra-county battle, it was the defending champion Rebels who emerged with the championship trophy.

“I’m super proud of my kids, no doubt. Hats off to them,” said Randolph Southern coach Kyle Good. “We’ve faced a lot of adversity this season with some Covid issues, but our guys stayed mentally tough and were able to win against some very good competition. Hopefully this will give us some confidence as we get into the second half of the season and into the sectional.”

Experience played a big role for the Rebels, who were undefeated on the day at all three singles positions.

All three of Southern’s singles players returned as defending county champs with Jake Good winning at the No. 1 spot, Jake Mifsud at the number two spot and Tyler Fink at the No. 3 spot. Mifsud won last year at No. 1 doubles.

Winchester’s No. 1 doubles team of Drew Loyd and Charlie Sauser won the title at No. 1 doubles, and Union City’s Corbin Richards and Brennan Hoggatt were champs at No. 2 doubles.

“We had to do it this year,” said Good, alluding to the fact that all three of the Rebels’ singles players are seniors. “This is so good for our program because our junior high kids will see what these guys accomplished and maybe start thinking they want to be a part of it and also win a county championship.”

The tournament began with a match between Southern and Union City, and the Indians under Doug Jefferis came in riding high, having won eight matches in a row and unbeaten in the Tri-Eastern Conference at 5-0.

After three of the matches were concluded, the Rebels were ahead 2-1, meaning the Indians needed to win both remaining matches to pull out the victory.

At No. 2 singles, Mifsud and the Indians’ Braydon Hoggatt staged an intense battle with Hoggatt winning the first set 6-2, and Mifsud coming back to win the second set, 6-2. The third set proved to be a nail biter with Mifsud edging Hoggatt in an extra set, 7-5,

At No. 1 doubles, there was more excellent play as Southern’s Vance Taylor and Hagan Gambrel teamed up to win the closest match of the day against Union City’s Parker Kerns and Zack Fulk, 4-6, 7-5, 6-4. Taylor and Gambrel trailed 3-0 in the decisive third set before rallying for the win.

Union City’s win was at No. 2 doubles where Richards and freshman Brennan Hoggatt won 6-0, 6-1, over Southern’s Jaxson Latello and Trenton Jeffries.

“The score doesn’t really reflect how close it was,” Good said of the match with the Indians. “Our guys were able to get some key points at some key times. They were poised in a lot of tough situations, and I think that had a lot do do with experience.”

The loser of the opening match advanced to face Winchester in the next match.

Union City defeated the young Falcons 4-1, getting wins at all three singles spots as well as the No. 1 doubles position.

Winchester gained its lone victory at No. 1 doubles where cousins Drew Loyd and Charlie Sauser won over Union City’s Kerns and Fulk, 6-1, 6-1.

The Indians won at No. 2 doubles where Richards and Brennan Hoggatt defeated the Falcons’ Cooper Hummel and Levin Hines, 6-1, 6-3.

The third and final match was between the Falcons and the Rebels. If the Falcons could pull out a win, each team would have finished the day 1-1 and tiebreaker criteria would be used to determine an overall team champion.

The Rebels, though, with more experience, won three of the five matches to sew up their second straight title.

The Falcons’ Loyd and Sauser won 7-6, 6-4 at No. 1 doubles over Southern’s Taylor and Gambrel to nail down a championship, while the Falcons’ Hummel and Hines topped Southern’s Latello and Jeffries, 6-2, 6-2.

All three teams will join Jay County at the end of the season in a four-team sectional.

Sun and a few passing clouds. High near 80F. Winds light and variable.

‘I couldn’t introduce myself to people’, stars who have struggled with a stutter