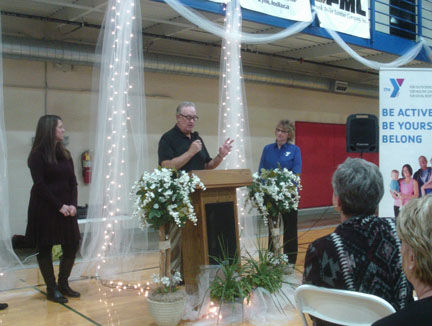 Randolph County YMCA Board President Tim Passmore reads from a plaque before presenting it to Chief Executive Director Ceann Bales in honor of her 21 years of service. 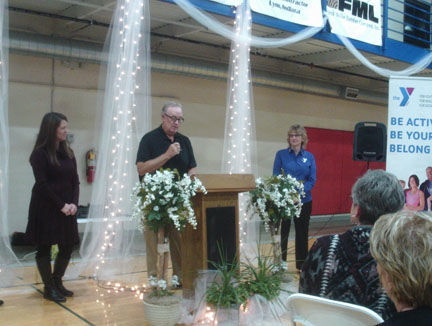 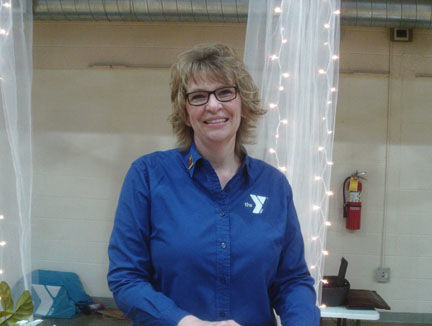 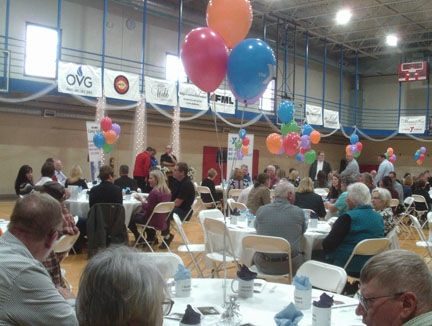 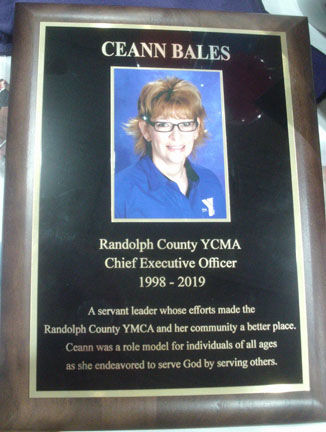 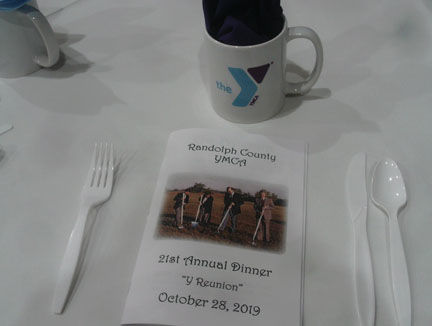 This program and mug were given to attendees of the Randolph County YMCA's 21st Annual "Y Reunion" Dinner on October 28 exactly 30 years after the open house celebrating their new facilities.

Randolph County YMCA Board President Tim Passmore reads from a plaque before presenting it to Chief Executive Director Ceann Bales in honor of her 21 years of service.

This program and mug were given to attendees of the Randolph County YMCA's 21st Annual "Y Reunion" Dinner on October 28 exactly 30 years after the open house celebrating their new facilities.

On Monday evening, October 28, the Randolph County YMCA held its 21st Annual “Y Reunion” Dinner, exactly 30 years to the day after the open house celebrating its new facilities at its current location.

The YMCA has a long and interesting history in Randolph County. In 1874, the Young Men’s Christian Association came to Union City. Meetings were held in a room at 38 Columbia Street. 40 years ago, in 1979, the Winchester Area Family YMCA was chosen as the official title of the new YMCA organization by a steering committee with Jan Chalfant serving as the chairperson. Chalfant, Roger Grimm and Chris Talley met with the executive board of the Richmond YMCA to discuss branch status. The YMCA began renting a room for its headquarters at the Winchester Armory beginning Oct. 1, 1979.

In 1985, the Y moved its headquarters to the lobby of the former Randolph Hotel while programs continued to be offered at the National Guard Armory located on Western Avenue and Huntsville Road. Kirk Heimstead was hired as the Randolph County YMCA’s new Executive Director.  A change to Corporate Challenge added an overall team champion with Randolph Central School Corporation winning the title. Tee Ball was added as a new program under the direction of Jeff Clark. The following year, Nancy (Hensley) McFarland was named the Randolph County YMCA’s new Executive Director.

Dr. Donald W. Tharp was selected to Chair the YMCA’s “To Bring a Dream to Reality” Capital Campaign that would eventually build a YMCA facility in Randolph County. The campaign goal was to raise $2 million. Solon Cousins, National Executive Director of the YMCA, attended the kick-off banquet for the campaign in 1987.

In September of 1988, a ground breaking ceremony was held on 10 acres of land donated by Mr. & Mrs. Francis Simpson that became the site of the current facility. Also that year, Church Challenge was introduced as a new special event.

Solon Cousins, National Executive Director of the YMCA, returned to be the guest speaker at the Y’s Annual Dinner in 1990 stating- “It was a joy to be here when the dream began and it is a joy to come back and be part of the dream come true.”

The Y Child Care expanded opening its “MY Day Care Center”, a state registered program for children ages 3-6 years old in 1992. It was located in the old kindergarten rooms at the Winchester Field House. Sue Nunez was selected as its Director.

The Randolph County YMCA’s mortgage was paid off in 1997, thanks to a generous gift from Elizabeth (Betty) Goodrich Terry.

Ceann Bales was hired as the Randolph County YMCA’s new Executive Director, 21 years ago. During her tenure, the Y has vastly expanded the services it offers to the community. She has also overseen many improvements to the facilities. In 2001, The Y stepped up to meet the childcare crisis in the community by offering full day childcare in the Y facility and at the Church of Christ in Winchester.

In 2002, a donation of $104,000, that was received in 1998, was designated towards the purchase and renovation of an office building on Browne Street to house the new childcare program debt free. The Chenoweth Childcare Ministry opened in August and the Y received the Business Leadership Award from the Winchester Area Chamber of Commerce for this achievement.

The Y board adopted the following vision statement in 2005 to be reached by 2020:

“The Randolph County YMCA will be the hub of the community activity and the recognized leader in life-long health and wellness. The YMCA will be a place where children are nurtured, teens and empowered, families grow stronger and older adults are engaged.”

The Randolph County Y was recognized in 2006 by the national Y magazine, Discovery, for its excellent membership retention rates. In 2008, the Y took over the implementation of the CPR program (Creating Positive Relationships) from St. Vincent Randolph Hospital. CPR is an abstinence based pregnancy prevention program that is taught in all five county schools and reaches approximately 1400 youth annually. The St. Vincent Randolph Hospital Foundation funds the program.

The Y also began its “Where Lives Are Changed” capital campaign with the goal of building a licensed childcare center connecting to the current facility. This goal was achieved in May of 2013 when the Beynon Family Childcare Center was dedicated and became the only licensed child care center in Randolph County. The Y’s Childcare Program has continued to expand with the opening of their Childcare Center in Union City. They are looking to expand further with a similar childcare facility in Farmland.

In 2010, the “Girls On The Run” program expanded to be offered at all five county schools and the “Girls On Track” program was piloted at Union City Middle School. In 2012, The Randolph County Y changed its logo as part of the National Y initiative.

In March of 2014, using the funds from the bequest given to the Y by Rowena Bake, the YMCA purchased the 20 acre Camp Yale facility which was began by Judge Jan Chalfant behind the old Randolph County Infirmary South of Winchester on U.S. 27.

The 21st Annual Dinner’s meal was provided by Mrs. Coe’s Noodles and consisted of mashed potatoes paired with either beef and noodles or chicken and noodles. Guests could also choose a vegetable, a dinner roll, and assorted pies from Wick’s Pies.

All of the staff members and volunteers were recognized with the gift. Office Manager Anthony Pruett, and his mother Childcare Cook Linda Pruett were given pins in honor of their 5 years of service. Lisa Morford was given a pin in honor of her 15 years as a Childcare Teacher.

Many of the former Board Members in attendance were invited to come up and share a favorite memory, some were sweet, some were funny, all were shared and looked back upon fondly, by many in the room.

As the evening drew to a close, Bales gave her annual “Reflections on the Randolph County YMCA.” This year’s reflections were bittersweet as Bales will be stepping down from her position in a few months to become the new Executive Director of the Randolph Economic Development Corporation. At the end of her reflections, Board President Tim Passmore returned to the podium to present Bales with a two plaques one of which will hang in the welcome center of the YMCA. The plaque reads, “Ceann Bales Randolph County YMCA Chief Executive Officer 1998-2019 A servant leader whose efforts made the Randolph County YMCA and her community a better place. Ceann was a role model for individuals of all ages as she endeavored to serve God by serving others.”

During the evening many commented that a community of our size was lucky to have a facility like this. Former Board President, Chuck Turner, was amazed at how well maintained the Y is. “I was here when we were working out all of the details of this building 30 years ago and the building still looks brand new,” he stated. Not only are we lucky to have this facility, we are lucky that it has been in the care of people like Ceann Bales, Tom Byrum, and all of the other staff and volunteers whose hard work and efforts have made the Randolph County YMCA the asset to the community it has become.

He lost his hearing due to Viagra?! These stars have all taken the little blue pill

100 best documentaries of all time

The debt ceiling has existed since 1917. Here's how it's impacted government spending ever since