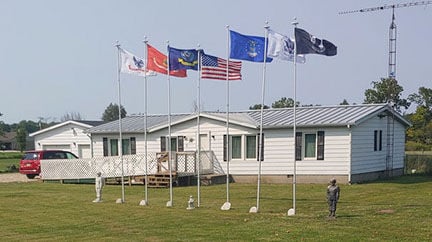 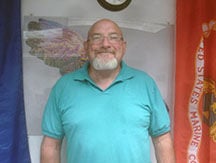 No one can doubt Randolph County resident Michael Kennedy’s love for our country. The Veterans Service Officer for Randolph County’s love of this country’s military is on display in the front yard of his home. “I’ve been wanting to do this for years,” said Kennedy of the display. “I’m a veteran and I have family members that have served in every branch of the armed services except for the U.S. Coast Guard,” he added. Most of the items in the display were purchased in May of 2020 with the intention of being placed soon after. “I had a heart attack in June, and another in July, so for health reasons I was forced to wait until I felt up to it,” Kennedy explained.

The display features the flag of each branch of the U.S. Armed Forces “in the proper order from left to right,” added Kennedy. They are U.S. Army; the U.S. Marine Corps; the U.S. Navy; the U. S. Air Force, the U.S. Coast Guard; and the P.O.W. / M.I.A. Flag. The American Flag is supposed to be flown in the most prominent position, either to the right of all of the others or if centered flying higher than the other flags. If flown on the same staff, the State flag is to be lower and a size smaller than the U.S. flag. If flown with the flags of other countries, The U.S. Flag is to be of equal height and size to that flag. Each of the flags has a stone beneath it with the insignia of the military branch above it. Below the American flag is a statue of a praying soldier. There is a statuette of a soldier at each end of the display.

“I purchased all of the materials relatively locally,” said Kennedy. I got telescoping flagpoles from Harbor Freight. The flags were all from the Army and Navy Surplus Store in Richmond. I purchased the statuettes from Locker’s Touch of Country Gifts in Portland,” he added.

Kennedy served as Randolph County’s Veterans Service Officer for 14 years before the heart attack forced him to retire. Over those 14 years as Veterans Service Officer, Kennedy assisted countless Veterans and their families with their needs. There are now quite a few more resources available for Veterans in Randolph County than there were in 2006 when he started in the position, and Kennedy had a hand in most of those from purchasing the DAV van, to opening the Journey Home, to bringing the replica of the Vietnam Wall to Winchester in 2015, to the golf outing in support of Veterans for the last eight years at Hickory Hills Golf Course.

As he has been feeling much better, and the position had yet to be filled, Kennedy has resumed the duties of Veterans Service Officer. “I just missed it too much,” he explained. “Yes, I enjoy golfing and spending time with my grandchildren and my horses. But there’s nothing a satisfying as helping our Veterans,” said Kennedy.

Bald, butch and beautiful! These are the sexiest bald men in the world!

They sat on the QUEEN's THRONE?! Stars who misbehaved at Buckingham Palace

Badgers in the NFL: Check out top performances by former Wisconsin players in Week 6