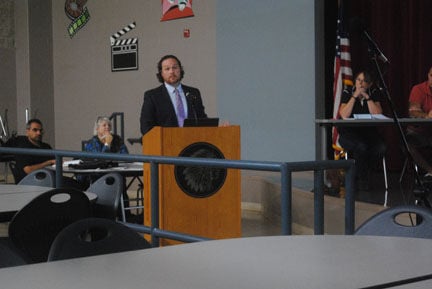 A representative of Baker Tilly Municipal Advisors explains the financial aspects of the proposed renovation plans to those in attendance at the public hearing on Thursday at Randolph Eastern School Corporation. 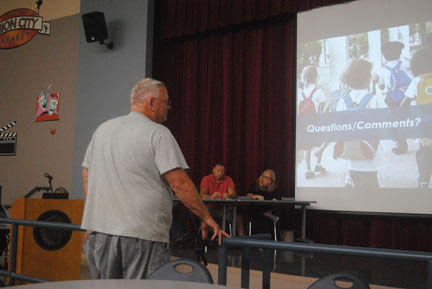 A concerned citizen voices his concerns over proposed renovation plans at the public hearing on Thursday at Randolph Eastern School Corporation. 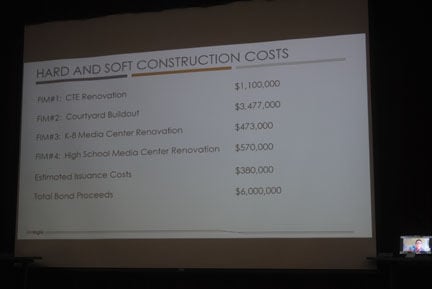 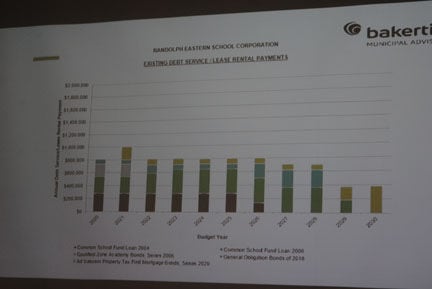 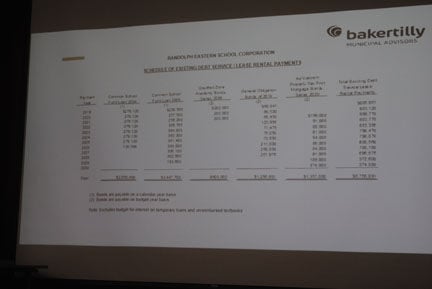 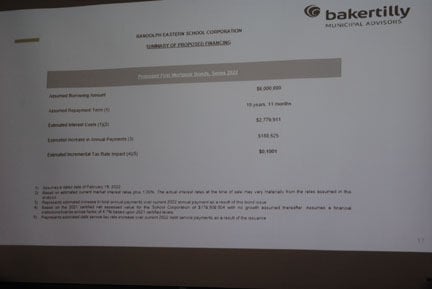 A representative of Baker Tilly Municipal Advisors explains the financial aspects of the proposed renovation plans to those in attendance at the public hearing on Thursday at Randolph Eastern School Corporation.

A concerned citizen voices his concerns over proposed renovation plans at the public hearing on Thursday at Randolph Eastern School Corporation.

Randolph Eastern School Corporation’s plans for renovations to improve the school’s facilities has stirred up concerns of local residents. At a public hearing on September 9, many residents brought their concerns about the project to the attention of the administrators and board members.

Superintendent Aaron Black explained the project to those in attendance. “Working with an engineering and architectural firm, we identified some of the weak spots in our facilities,” he stated. “One of these was a lack of space for small group instruction. Students perform better academically with more time spent in small group instruction,” explained Black. “We also need to do our best to teach our students the 21st Century job skills they will need when they enter the workforce,” he continued. “We want to focus on improving the facilities for our technical, agricultural, and engineering classes,” said Black. “We plan on making renovations to the classrooms and laboratories in our technology and agriculture wing. These changes will improve access to these lab areas making cooperation easier and also allowing easy access to outdoor areas for various projects,” said Black.

“Technology is constantly changing,” said Black. “As such, we need to improve our libraries and media centers on both the elementary and high school levels.” A member of the firm then showed those in attendance a visual walkthrough of the proposed project. A representative of consulting firm Baker Tilly then explained the financial aspects of the project.

The total estimated cost of the project is $ 6,000,000. In order to pay for the project, property taxes will be raised. “The impact on most property owners will be minimal,” stated Black. “Unfortunately, the brunt of this will be felt by those who own the most land, our farmers,” he continued. This project will result in an increase of $1.29 per acre in taxes for farmland. This is planned to be paid over a period of 20 years.

“I’m in favor of education, teachers don’t get paid enough. But, with the way the economy is now, I’m not sure this is the right time,” stated one citizen. “Who will pay for this,” said another. “With the rising costs of everything, what guarantee do we have that the cost of the project will not increase,” asked another. “With everything else that is going on, I’m not sure that this should be a top priority,” commented another. “Instead of doing this all at once, maybe it would be better to do it in a piecemeal fashion, maybe do one part of it now and another somewhere down the line,” proposed another citizen. All of these are valid points.

No decision was made at this hearing. Another public hearing on the project will be held at the school at 5:00 PM on September 16. Many of the farmers in Ward and Jackson Townships could be affected by the decision Randolph Eastern School Corporation makes on this project. The School Corporation wants to do what they believe is best for their students’ education. While everyone is in favor of doing what is best for the kids, those opposed to the project bring up many valid points. With luck, some sort of compromise that both sides are comfortable with, will be reached.

Photos: No. 12 Notre Dame trounces No. 18 Wisconsin in Soldier Field

Here are some of the best signs as 'College GameDay' visits Soldier Field for Badgers vs. Fighting Irish