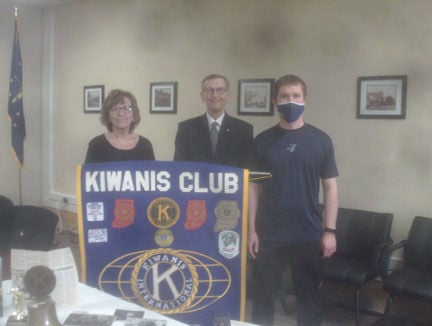 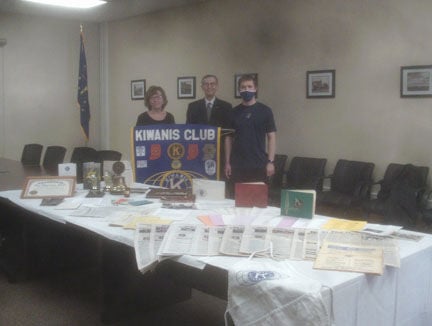 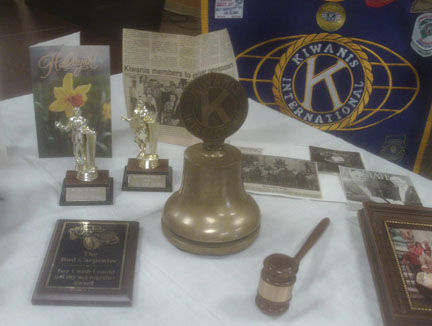 Some of the Kiwanis Club artifacts displayed by Fred Pries during his recent presentation on the history of the 100 year old club. 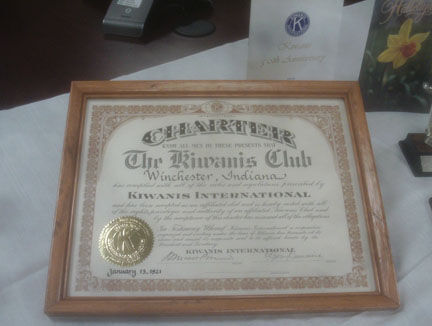 The Charter presented to the Winchester Kiwanis Club at the founding of the Club on January 13, 1921. 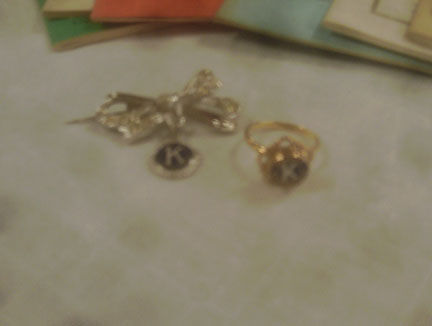 Some of the Kiwanis Club artifacts displayed by Fred Pries during his recent presentation on the history of the 100 year old club.

The Charter presented to the Winchester Kiwanis Club at the founding of the Club on January 13, 1921.

On January 13, 1921, a new service club in Winchester received its charter. 100 years later, that club continues to serve the community. Kiwanis International  is an international service club founded in 1915 in Detroit, Michigan. It is headquartered in Indianapolis, Indiana, and is found in more than 80 nations. Each year, Kiwanis clubs raise more than US$100 million and report more than 18.5 million volunteer hours to strengthen communities and serve children.

The organization originated in August 1914 in Detroit, Michigan from a conversation between Allen S. Browne and Joseph G. Prance. Browne’s idea was to solicit business and professional men asking them if they would be interested in organizing a fraternal organization with a health benefit feature. Browne was compensated five dollars per new member that joined for his operating budget. Browne and Prance set out and recruited enough members to apply to the state for a not for profit status. The state approved the application on January 21, 1915 and the Supreme Lodge Benevolent Order Brothers was formed. The name was changed to Kiwanis a year later. The name “Kiwanis” was coined from the Ojibwe language expression derived from the word giiwanizi meaning to “fool around”: ningiiwaniz, which is found in the Baraga Dictionary as “nin Kiwanis”, meaning “I make noise; I am foolish and wanton” or “I play with noise”.Whatever the original meaning, the organization’s founders translated it as “We build”, which became the original motto of Kiwanis. In 2005 the organization chose a new motto, “Serving the Children of the World”.

The local club’s first meeting took place in the basement of the Church of Christ on Main Street in Winchester. It was attended by 75 local residents and delegates of Kiwanians from Muncie, Portland, and Richmond. John C. Brommert, the Lieutenant-Governor of Indiana Kiwanis Clubs gave a speech outlining the principals of the Kiwanis Clubs and the work clubs had done in other cities. Officers for the club were appointed. Oren Ross was named President, John Maynard was Vice-President, Carl McCamish was Secretary, and George Mills was named Treasurer.

The six permanent Objectives of Kiwanis International were approved by Kiwanis club delegates at the 1924 Convention in Denver, Colorado are; 1. To give primacy to the human and spiritual rather than to the material values of life; 2. To encourage the daily living of the Golden Rule in all human relationships; 3. To promote the adoption and the application of higher social, business, and professional standards; 4. To develop, by precept and example, a more intelligent, aggressive, and serviceable citizenship; 5. To provide, through Kiwanis clubs, a practical means to form enduring friendships, to render altruistic service, and to build better communities; and 6. To cooperate in creating and maintaining that sound public opinion and high idealism which make possible the increase of righteousness, justice, patriotism, and goodwill.

For 100 years, the Winchester Kiwanis Club has exemplified these ideals while serving the community. The biggest fund raising project of the local Club has been its Annual Newspaper Drive which began in 1947 and continued until last year when it was cancelled because of the Covid-19 pandemic. Each year Kiwanians as well as members of Winchester Community High School’s Key Club, and more recently the Lady Falcons Basketball team, go door to door throughout Winchester giving newspapers to those who answer their door in exchange for a good-will donation. With the proceeds being used to fund the many scholarships given to local students by the club.

Kiwanis founded and supports Key Club International. Started in Sacramento, California in 1925, Key Club is the oldest and largest service program for high school students in the world. As of 2010, Key Club has 250,000 members in 5,000 clubs in 30 nations.

Originally an all male club, the Kiwanis began admitting women as members in 1987. Some of the first women admitted to the local club include Nancy McFarland, Mary-Ellen Bertram, Kathy Beumer, and AnnMarie Browne. The current membership of the Winchester Kiwanis Club is nearly 50 percent female.

Long time Kiwanian Fred Pries recently made a presentation on the history of the club at the club’s regular Tuesday meeting where he displayed many artifacts from the century old club. Among these artifacts are old newspaper clippings; programs from various events; the Club’s Charter; a ring and pin that belonged to Beatrice Hughes, a long time friend of club member Frank Morgan, and numerous other pieces. Over the last few decades, many service clubs, such as the Kiwanis, have struggled to gain new members. The Winchester Kiwanis received an award this year for being one of the only clubs whose membership increased during the Pandemic. The club actually gained three new members over the past year.

Over its first century, the Winchester Kiwanis Club has served the community well. As the club looks back on its past, the current members look forward to continuing to serve the community well into the club’s next century.

The Winchester Kiwanis Club holds regular meetings at Noon on Tuesdays on the second floor of the Towne Square Community Center on the Southeast corner of Main and Franklin Streets. Anyone interested in becoming a member of Kiwanis may visit a meeting or may contact  Fred Pries at fredapries@frontier.com or current Kiwanis Club President Drew Lovern at drew.lovern@comcast.net.

Some clouds in the morning will give way to mainly sunny skies for the afternoon. High 62F. Winds SW at 15 to 25 mph.

U.S. cities with the cleanest air

A game-by-game look at the Badgers' new football schedule