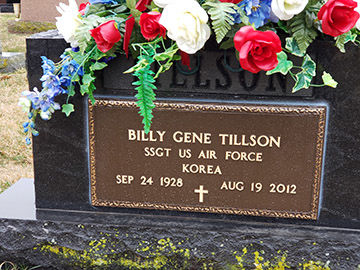 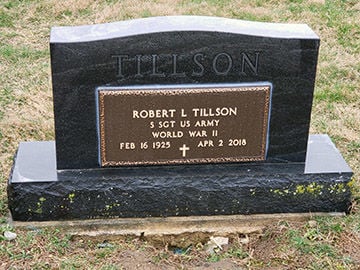 All U.S. Military Veterans are entitled to a bronze plaque that is typically affixed to their gravestone after their death. Usually, the funeral home takes care of the arrangements for these plaques. Sometimes, this can be a rather lengthy process. Two brothers from the Spartanburg area, after years of waiting, have finally been recognized by the Veterans Administration (VA) for their contribution to the United States.

Doug and Dale Tillson, who are cousins, are the sons of Robert and Billy Tillson, brothers who served in the Army during World War II and The Korean Conflict respectively. The cousins had waited since the death’s of their fathers for the plaques to come in from the funeral home. Doug got wind of our local Veterans Service Office and went to the office to find out why they had not received his father’s Plaque. Randolph County Service Officer Michael Kennedy made a phone call to the Headstone and Marker Office and they reported “They had no record of his father’s Plaque every being requested”. Doug stated, “ I was told repeatedly by the Funeral Home that it would be in, but the VA was back-logged and it could be up to two years before it would be received.”

With the assistance of Kennedy, Doug requested the plaque and two weeks later it was in hand. He was so elated that he told his cousin Dale of his results and Dale drove up from Cincinnati to see about his father’s plaque. Dale visited our Service Officer on March 6th. In less than two weeks, on March 13th, it was received. Within days of arrival, both plaques were placed on the respective grave markers, after years of waiting.

Needless to say, the families are happy that they came to see our local Veterans Service Officer. “We are glad we came to see Mr. Kennedy, and that through his actions the family now has the finishing touches and tribute that their fathers deserve,” said Doug.

“The funeral homes mean no disrespect, but sometimes they get busy and the paperwork may not get properly filled out, or gets sent to the wrong place,” said Kennedy. “We can cut out some of the red-tape and go straight to the source,” he continues. “What can take the funeral homes months to get, we can usually get within a couple of weeks,” he explains.

Biding their time: Athletes, coaches have fun on social media with sports stuck on hold

Photos: A look at how COVID-19 is affecting Wisconsin