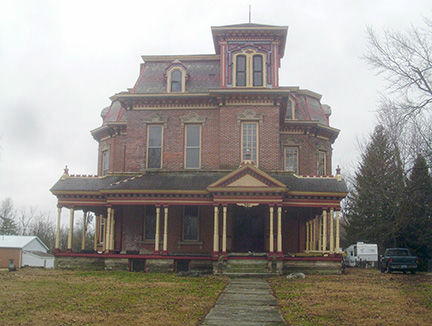 Winchester’s historic Stone Mansion will be the site of historic tours, flashlight tours, and a four hour ghost hunt this weekend. Proceeds from the event will go towards the restoration of the 148 year old home of one of Winchester’s most prominent, influential, and historically significant citizens, General Asahel Stone. 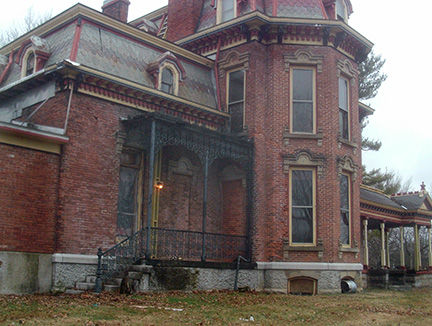 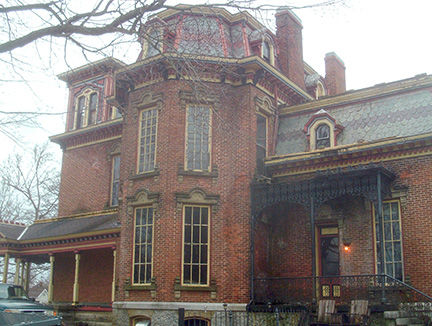 Winchester’s historic Stone Mansion will be the site of historic tours, flashlight tours, and a four hour ghost hunt this weekend. Proceeds from the event will go towards the restoration of the 148 year old home of one of Winchester’s most prominent, influential, and historically significant citizens, General Asahel Stone.

The majestic Stone Mansion has stood watch at the Southern end of Meridian Street in Winchester since it’s construction, in the Second Empire architectural style, for General Asahel Stone and his wife Lydia in 1872. During the last few years, the once great home has been allowed to fall into a state of disrepair. Last year, it was purchased by STOP, which stands for Save The Old Properties, a non-profit organization founded by twin brothers Dan and Richard Allen. STOP purchases historic properties, makes repairs, and finds a new use for them. STOP owns several such properties in the area including the old Randolph County Infirmary on U.S. 27 across from the Randolph County Fairgrounds.

Many of these older structures are rumored to be haunted and “Ghost Hunters” like to visit them to search for signs of the paranormal. At 7:00 PM Saturday, January 18, Tim Murphy and Melinda Gapen will lead a history tour of the Mansion with time to explore and learn about the history of the home and the man for whom it was built. The cost for the tour is $25 per person. There will then be two “Flashlight” tours of the mansion at 9:00 and 11:00 PM. These also cost $25 per person. These will include some history, a tour and time to explore with Murphy and his ghost hunting equipment. Following these “Flashlight” tours, there will be a ghost hunt from 1:00 AM until 5:00AM. The cost for those willing to brave this hunt will be $50 per person. Anyone wanting to purchase tickets for any of these tours should contact Kate Thornburg at (765) 808-8730. All proceeds will go towards the restoration of the historic Mansion.

General Asahel Stone was born in Marietta, Ohio in 1817. He was the son of Ezra Stone, a respected carpenter who passed his knowledge to his son that followed his father into the trade. Young Asahel would become much more than a simple carpenter. In 1837, he married Lydia Preston near Cincinnati. In 1839, the Stones came to Winchester where he became one of its most prominent and influential citizens. Originally they lived in a home on Stockyard Road. After that home burned, they moved down the road a ways to the home where, more recently, Don and Wilma Hahn lived.

Stone was a State Senator both before and after the Civil War. He was instrumental in shifting the railroad to come through Winchester and his own property. He also supported the Temperance efforts both publicly, and personally.

In 1861, Governor Oliver P. Morton appointed him Commissary General for the State of Indiana. In 1862, he was also named State Quarter Master General. This position basically meant that it was his job to locate the supplies and provisions needed by various units of the Union Army.  He was in charge of the State Bakery, which provided necessary supplies for government institutions including military hospitals and prisons, as well as veteran, widow, and orphan homes.

After the war, he returned to Winchester. In 1865, he was one of the organizers of the First National Bank of Winchester, and was named its first President. When that bank was reorganized in 1879, he became President, a Director, and a Stockholder of the Randolph County Bank.

Stone donated forty acres to establish the Fountain Park Cemetery as a public cemetery for the citizens of Winchester, Indiana in March of 1880. Stone was also named Secretary, Treasurer, and General manager of the Winchester Wagon Works. He was also involved in a number of organizations that promoted the public welfare of the citizens of our community.

Upon his death in 1891, General Stone willed the Mansion to his wife Lydia. She died the following year and W.E. Miller purchased the mansion from her estate. Miller was the owner of a prominent Department Store which was at one time located at the current location of Everett’s Family Diner. Daniel Speicher purchased Stone Mansion from W. E. Miller in 1910. Charles Moore bought the home in 1911 and sold it to Carl Thompson in 1913. In 1920, Thompson sold the Mansion to Harry Boyle, In 1927, the mansion went through three owners, Otis Kirtley bought it and sold it to Enos Lykins who sold it to Minnie Duncan. William P. Morris then bought the Mansion and sold it to Glen Keys in 1961. in 1968, the home was purchased by Edward and Nancy Williams. The Williams, applied for Stone Mansion to be added to the National Register of Historical Places in February of 1979. It was approved in March of 1979. It was included for architecture and its association with General Asahel Stone.

Richard Wise, a former owner of this publication, purchased Stone Mansion from Edward Williams in 1985. He filed for a business license for “Stone Mansion Inn, Inc.” which operated as a restaurant. It was during this time, that a Southern addition was added to the home to act as the kitchen of the restaurant. Roger Harris purchased Stone Mansion from Richard Wise in 1997. Canon Briggs, the owner of Briggs Construction, purchased the mansion in June of 2016, and began the task of attempting to restore the home.

STOP in conjunction with the Randolph County Historical Society is hoping to use the funds generated from this, and future events held at the mansion to restore the home to at least a fraction of its former glory. “It was in pretty bad shape when we first came in to start trying to fix it up,” says society member Ted Martin. “There were fleas and bedbugs in several of the rooms. There was a raccoon trying to get into the cabinets,” he continues. “ We’ve had exterminators here several times and gotten rid of the bugs. We’ve fixed the plumbing, and we’re trying to get the leaks in the roof patched,” he adds. “There is a lot of work ahead of us to get this place fixed up. Hopefully, people will come to the events we have planned and help us to restore this great old building,” says Martin.

“I grew up just down the street and spent a lot of time in this neighborhood as a kid,” he goes on. “There are a lot of great old buildings here. It’s really easy to see yourself back in that time period. I can just imagine seeing an old steam engine rolling down the tracks that went by the Mansion. I remember that there used to be an orchard about where the parking lot is,” adds Martin. “It just feels old here,” he continues, “I don’t know of anyone having any ‘unusual’ experiences in the Stone Mansion, but any building with this much history certainly has that potential.”

So whether you’re just interested in learning some local history, or perhaps in search of a paranormal experience of your own, a visit to Winchester’s Historic Stone Mansion this weekend may be just the activity you’re looking for. In either case, you would be contributing to the restoration of one of the communities’ most well known historic landmarks.