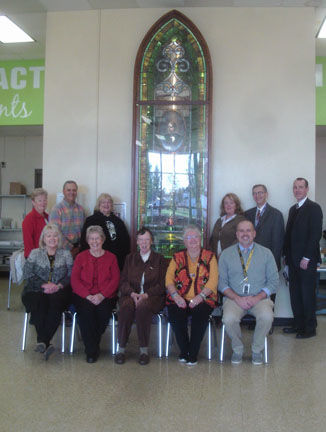 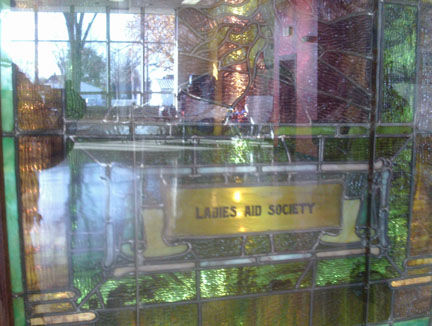 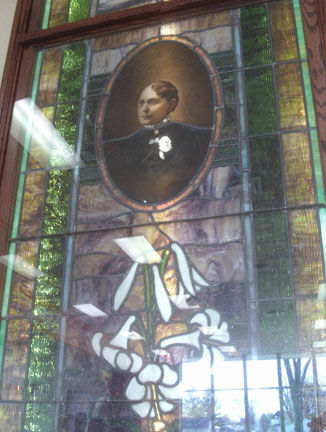 A closer look at the depiction of Frances E. Willard on the stained glass window now displayed in the cafeteria at Winchester's Willard Elementary School which was named in her honor. 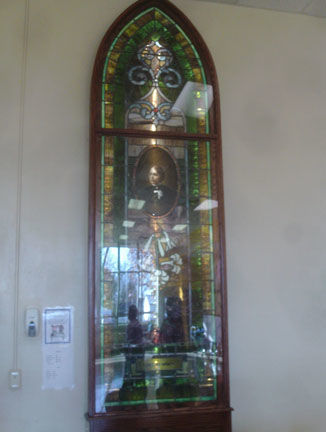 This stained glass window depicting Frances E. Willard that was originally in the First United Methodist Church in Winchester has found a new home in the cafeteria of Willard Elementary School, which was named in her honor.

A closer look at the depiction of Frances E. Willard on the stained glass window now displayed in the cafeteria at Winchester's Willard Elementary School which was named in her honor.

This stained glass window depicting Frances E. Willard that was originally in the First United Methodist Church in Winchester has found a new home in the cafeteria of Willard Elementary School, which was named in her honor.

A stained glass window that was originally in Winchester’s First United Methodist Church on Meridian Street has found a new home in the cafeteria of Willard Elementary School.

The window is coincidentally named in honor of the woman depicted on the window.Frances Elizabeth Caroline Willard was born in 1839 in Churchville, near Rochester, New York. She was named after English novelist Frances (Fanny) Burney, the American poet Frances Osgood, and her sister, Elizabeth Caroline, who had died the previous year. Willard was an educator, temperance reformer, and women’s suffragist.

In 1858, the Willard family moved to Evanston, Illinois, and her father Josiah became a banker. Frances and her sister Mary attended the North Western Female College and their brother Oliver attended the Garrett Biblical Institute. After graduating from College, Willard held various teaching positions throughout the country. She was appointed president of the newly founded Evanston College for Ladies in 1871. When the Evanston College for Ladies became the Woman’s College of Northwestern University in 1873, Willard was named the first Dean of Women at the university. After her resignation, Willard focused her energies on a new career: the Women’s Temperance Movement. In 1874, Willard participated in the founding convention of the Woman’s Christian Temperance Union (WCTU) where she was elected the first Corresponding Secretary. In 1876, she became head of the WCTU Publications Department, focusing on publishing and building a national audience for the WCTU’s weekly newspaper, The Union Signal. In 1885 Willard joined with Elizabeth Boynton Harbert, Mary Ellen West, Frances Conant and 43 others to found the Illinois Woman’s Press Association.

In 1879, she sought and successfully obtained presidency of the National WCTU. Once elected, she held the post until her death in 1898. Her influence continued in the next decades, as the Eighteenth (Prohibition) and Nineteenth (Women’s Suffrage) Amendments to the United States Constitution were adopted. Willard developed the slogan “Do Everything” for the WCTU, encouraging members to engage in a broad array of social reforms through lobbying, petitioning, preaching, publishing, and education. During her lifetime, Willard succeeded in raising the age of consent in many states, as well as passing labor reforms including the eight-hour work day. Her vision also encompassed prison reform, scientific temperance instruction, Christian socialism, and the global expansion of women’s rights.

Willard died quietly in her sleep at the Empire Hotel in New York City after contracting influenza while she was preparing to set sail for England and France. She is buried at Rosehill Cemetery in Chicago She bequeathed her Evanston home to the WCTU. The Frances Willard House was opened as a museum in 1900, when it also became the headquarters for the WCTU. In 1965 it was elevated to the status of National Historic Landmark. Willard was the first woman included among America’s greatest leaders in Statuary Hall in the United States Capitol. Her statue was designed by Helen Farnsworth Mears and was unveiled in 1905. The Frances Elizabeth Willard relief by Lorado Taft, who also sculpted the soldiers and sailors monument on the courthouse square in Winchester, was commissioned by the National Woman’s Christian Temperance Union in 1929, and is in the  Statehouse in Indianapolis. The plaque commemorates the fiftieth anniversary of Willard’s election as president of the WCTU on October 31, 1879: “In honor of one who made the world wider for women and more homelike for humanity Frances Elizabeth Willard Intrepid Pathfinder and beloved leader of the National and World’s Woman’s Christian Temperance Union.”

Willard Elementary School in Winchester is one of several schools named in honor of the “Red Headed Reformer” the school’s original building was completed in 1906 and stood in the grassy area just South of the School’s current location. It was a brick building with three floors and eight rooms attended by grades 1 through 8. Classes were taught from 8:00 AM until 3:30 PM, students were allowed an hour and a half to return home for lunch as there was no cafeteria. In 1959 grades seven and eight were moved to driver. In 1969 a new building was erected featuring an open concept. Soon thereafter, the old building was demolished. Over the years, changes have been made, adding walls and closing off formerly open areas leading to the current structure of the school. Former teacher Cheryl Zell’s first years of teaching took place in the old building. She remembers helping to carry books to the new building when it was finished.

The window depicting Willard hung in the original Winchester’s First United Methodist Church. A new church and sanctuary were built shortly after a fire destroyed the original building in 1899.  Unfortunately, that building developed some structural issues which the Church could not afford to repair and the sanctuary portion of the building was torn down in 2015. The remaining portion of the building was purchased by the City of Winchester and is now home to the Fresh Start Recovery, a program by the Volunteers of America which aides mothers and children dealing with addiction.

Many of the Church’s stained glass windows and other items were salvaged before demolition began and are in storage awaiting new homes. Former teacher Bill Wilson remembers helping to remove the windows with great care in frigid January temperatures. The frame in which the window now resides was constructed by local woodworker Mick Wolfe.

On the morning of Friday, November 8, a small program about the window was presented in the cafeteria of the school. Willard Principal Jeremy Duncan started the program by showing a video on Frances Willard and gave a little bit of history about both Willard School and the First United Methodist Church. He then turned the program over to Shirley Swallow, the State Vice President of the WCTU, who got the attention of the students when she told them that she had brought cookies for all of them. She then introduced the National President of the WCTU, Sarah Ward, who gave an informative talk about the history of the WCTU and many of the things accomplished by Frances Willard and the WCTU.

Principal Duncan states that they are thrilled to be able to give this beautiful piece of historic art a new home where it will be seen by many of those who will become the future leaders of our community.