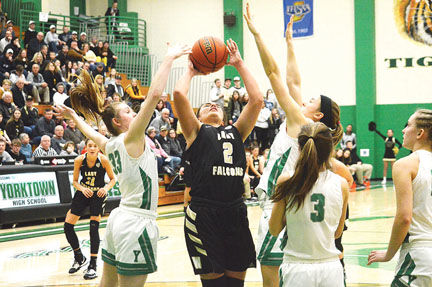 2 for 2 – Winchester’s Maddie Lawrence knifes her way between two Yorktown defenders to score a bucket in the sectional championship game. 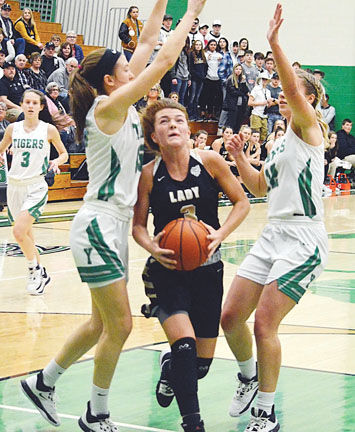 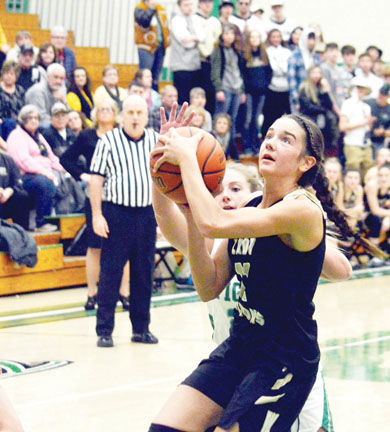 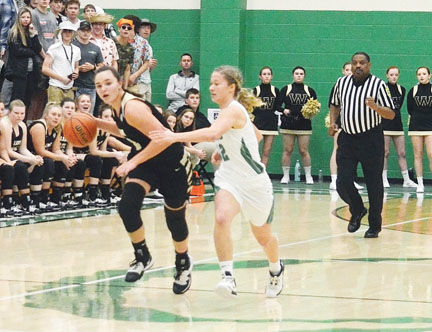 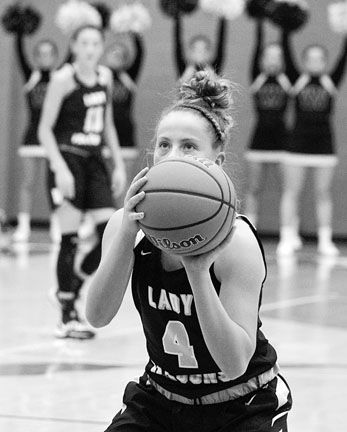 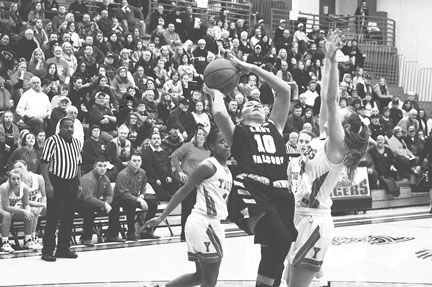 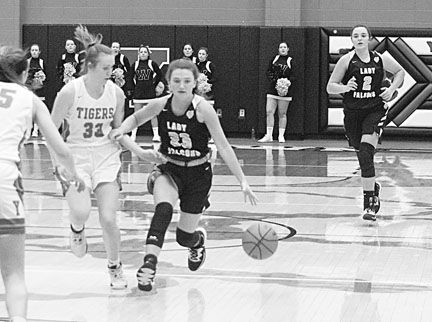 2 for 2 – Winchester’s Maddie Lawrence knifes her way between two Yorktown defenders to score a bucket in the sectional championship game.

After Winchester’s Lady Falcons dismantled a very good Yorktown team, 69-32, Saturday night to win the Class 3A Sectional championship, Coach Holly Gutierrez described up her team’s potential in a most accurate, yet abstract way.

“The sky is the limit for these young ladies,” she said, adding the qualifier of “if they play like they did against Yorktown.”

“I felt like I was coaching a veteran team the way they responded a played,” said Gutierrez.

Indeed, the Lady Falcons put on their best show against the Tigers, which is saying quite a bit since they have been performing good shows for most of the season. With the exception of a couple of games, the Falcons have been unshakeable, making even good teams look mediocre.

Most believed the Falcons would be able to win the Class 3A Yorktown sectional, which of course they did most impressively, but at the risk of not being Optimistic Ollie, winning the regional will not be so easy. These four teams who converge on Bellmont Saturday are the cream of the 3A crop. Let’s take a look.

On paper perhaps the weakest of the four teams, the Railroaders still managed to win 16 games and have veteran coach Bob Lapadot on the sidelines. Talented 5’8” freshman Bailey Kelham scored 18 of her team’s 32 points in a sectional championship win over Fort Wayne Concordia. Three other sophomores carry most of the rest of the load. It is extremely unlikely the Railroaders can defeat No. 2 Benton Central in the afternoon game, but expect this team to return to the regional for a couple of more years.

To know one’s surprise, No. 2 Benton Central is back at the regional and is the team most feel is Winchester’s biggest obstacle to win the title. The Lady Bison worked their way to the state finals last year by going through the south bracket and winning the Danville Regional. They went on to defeat Salem in the Jasper Semi-state before losing to Northwestern 61-39 for the 3A title.

The Knights have had a banner season under Eric Thornton, who has 365 coaching wins in his 23 year.

Ranked No. 4 in Class 3A in the final polls, Norwell survived three tough games in the Mississinawa Sectional by defeating Fort Wayne Luers 60-53, Mississinewa 59-55 and Bellmont 37-36. In the opening game against Luers, the Knights rallied from 19 points behind to claim the 7-point win.

Norwell has won at least 16 games for 14 straight seasons but can’t seem to make it far into the tournament.

The Knights have four players who are 5’9” or taller. Top players are Breann Barger, Kaylee Fuelling and Mariah Shelton.

The Falcons haven’t missed a beat despite being moved up to Class 3A due to the success factor. Ranked No. 11 in the final polls, Winchester has won six in a row since losing to Monroe Central in Randolph County Tournament.

Winchester is led by Indiana All-Star candidate Maddie Lawrence, the school’s all-time leader in points, rebounds and assists. Lawrence had plenty of help, including classmate Becca Chamberlin, a smooth shooting southpaw who can change the complexion of the game in a hurry when she catches fire.

Coach Holly Gutierrez has many other weapons on her bench and all have contributed at some point.

The Falcons are looking to return to the state finals for a third straight year.

Winchester takes on Norwell at 10 a.m. in the opener with Benton Central battling Garrett in the noon contest. The championship is slated for 8 p.m.