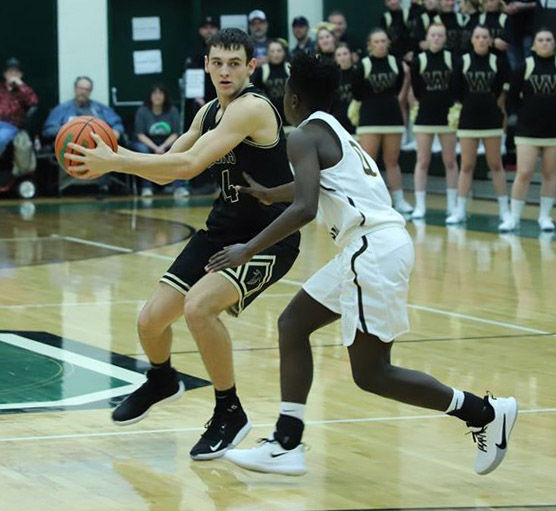 LYNN – Maybe this was the turning point for the Golden Falcons.

Payton Sparks put on a dominating show and Winchester responded to every challenge by Monroe Central Saturday evening in a 67-61 victory for the 2020 Randolph County championship held at Randolph Southern.

The Falcons claimed the winning trophy and also snatched back the County Horseshoe in the process. They have now won the county title for the past two years.

In a game featuring lots of talented players on both sides, the Falcons eased in front early on and led the entire game. But not by much.

Sparks, at 6-foot and 9 inches tall and 260 lbs., had an astounding final line of 24 points and 19 rebounds while also making well-placed passes to open teammates and clogging up the middle on the defensive end. While he certainly wasn’t the only reason the Falcons won, it was hard for the Bears to overcome his powerful presence.

“Hopefully this will be the shot in the arm that we need,” Winchester coach Dustin Baldwin said of the win. “Skill-wise, Payton has gotten so much better. He’s a hard guy to guard and he did a nice job of controlling the boards and getting the ball to the open cutters when they doubled up on him down low. But I thought this was a total team effort. It seemed like we had a different guy step up in key situations and we were able to respond when they made a run at us. We always seemed to have that response and it was always from a different guy.”

Winchester led 15-13 after one period and never trailed in the next three quarters, but they could never shake away from the determined Bears, who stayed within striking distance throughout.

Sparks had eight points in the second quarter, including a three-pointer, that helped the Falcons edge ahead 32-27 at the half.

Jackson Ullom, Monroe Central’s junior playmaker, tossed in 10 points in the second period to keep the Bears in range. Ullom would finish the night with 24 points.

Monroe Central’s sharpshooter, Will Jones, had the hot hand in the second half for the Bears, scoring 14 of his 16 points and hitting a couple a big shots from beyond the arc to keep his Bears close.

The Falcons, though, sparked by a big three-pointer dagger by Brooks Burelison, managed to pull ahead by 11 in the final period. The Bears made a run late, but Sparks hit some free throws to keep them at bay.

Monroe Central coach Justin Ullom noted his team had some trouble on the defensive end. “We didn’t have five guys connected defensively on the floor and it caused too many breakdowns and missed box out assignments. Every time we got it down to three to five points, we had a breakdown and gave up an easy shot or bucket.

Ranking the Top 5 Democrats in the 2020 race

“To be out-rebounded like we were and still be just down one late means our kids did some good things. We will get that fixed and keep working to be better than we were the day before.”

Wayde Sickels put in 14 points and Burelison tallied 11 for the Falcons as seven players reached the scoring column. The Falcons were 9 of 11 from the free throw line.

Gavin Smithson-Burciaga added 11 for the Bears, who had three players in double figures. The Bears made 11 of 12 at the free throw line.

Sorry, there are no recent results for popular images.