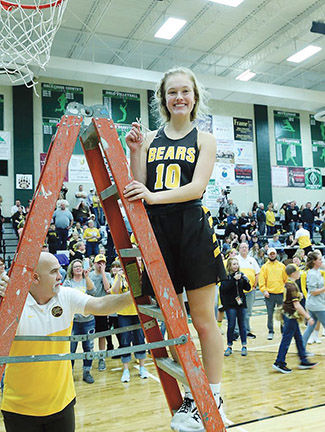 Monroe Central’s Gabby Beckham hit some big threes in the first half to help the Bears win the title. 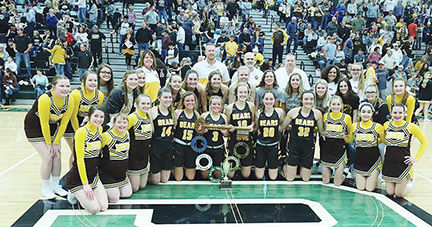 Monroe Central’s Gabby Beckham hit some big threes in the first half to help the Bears win the title.

Monroe Central seniors respond to the challenge to knock off Winchester

Monroe Central’s six seniors had some unfinished business. They had lost their last three battles with Winchester’s Lady Falcons. It wasn’t going to happen in their last Randolph County Tourney. And it didn’t! Scoring the game’s final 11 points, the Lady Bears put away the Falcons 65-49 to capture the 2020 county crown and the county key as a result.

With 2:54 remaining in the final quarter, Monroe Central Coach Brock Morrison called a time out with the Bears leading 54-49. Some 174 seconds later, pandemonium broke out from the Bear bench and the Bear faithful as Winchester had succumbed.

The seniors, the most heralded and ballyhooed group to enter the halls of Monroe Central High School, had defeated their nemesis.

Those six, Katie Pike, Allie Morrison, Gabby Beckham, the twins, Hannah and Brooke Bolton, and super sub, Hannah McCollum had set some lofty expectations with some lofty goals. They met this expectation and achieved this goal.

Whether it was Pike, Morrison, or Beckham playing filthy defense in the trenches, or Brooke Bolton playing a masterful floor game, or McCollum coming off the bench to deliver 15 points, the seniors were up to the task.

But the game really belonged to Hannah Bolton, their leader. She was hands-down the best player on the floor Saturday night. She finished with 29 points, 20 in the second half, 10 rebounds, four steals, and one block. Hannah made nine of 10 free throws in the final period to allow the Bears to hold onto the lead and the game.

That’s not to say that the Bear underclassmen didn’t show up. In limited playing time, Monroe Central got huge lifts from Alex McGrath, Macy Shinn, and Catherine Duncan.

The game didn’t begin quite so grand for Monroe Central. Winchester scored the game’s first six points. Caitlyn Campbell delivered the first deuce two-and-one-half minutes into the game. Morgan Lawrence scored the next two baskets off assists from her sister, Maddie, and Becca Chamberlin.

The Lady Bears retaliated by scoring 15 unanswered points, the final 11 of the first frame and the first four of the second stanza. McCollum came off the bench to ignite the spark. She drained a three-pointer to get Monroe Central on the scoreboard. McCollum followed with another fielder, before Hannah Bolton gave the Bears the lead for good at 7-6 canning two charity tosses.

Another pair of Hannah Bolton free throws and a third basket of the period by McCollum gave MC the 11-6 advantage at the first stop.

Beckham’s rebound basket and a hoop from Morrison extended the Bear lead to 15-6. Winchester finally got off the six-point barrier with a Becca Chamberlin triple, but a minute later a Hannah Bolton three-pointer off a dish from Beckham gave Monroe Central a 21-10 lead.

Twice the Bear advantage reached a dozen markers. Beckham’s triple made it 24-12. A 15-foot jumper by Hannah Bolton then made it 26-14. The Falcons cut the lead to eight points in the final minute on a Maddie Lawrence home run. Monroe Central had the answer, this one being a three-pointer from Pike. The Bears led 31-20 at intermission.

The Falcons made a charge in the third period. Midway through the session, Becca Chamberlin’s three-point play saw Winchester creep within four points, 36-32. The answer this time came from Hannah Bolton. After hitting one of two foul shots, Bolton’s home run gave Monroe Central an eight-point advantage.

Winchester’s response, a Gena Moore triple. The Bear retaliation was another Hannah Bolton bomb, making it 43-35.  Maddie Lawrence’s fielder cut the Falcon deficit to six points. Hannah responded with another deuce, giving MC a 45-37 margin with eight minutes to play.

The Bears responded by scoring seven successive points, all on free throws by Hannah Bolton. Maddie Lawrence hit a triple, but McCollum answered with a deuce.

Winchester’s Campbell scored the next five points, a three-pointer and a pair of freebies, procuring the 54-49 score, inducing Coach Morrison to call his time out.

Avlon: Every other Senate trial in history had witnesses

Coach Morrison commented after the game that he saw more smiles from his kids after the game than he had seen all season. Of course, he said this with a broad, beaming smile across his face. It is Morrison’s first county championship as a varsity coach, although he is no stranger to county titles while playing for Winchester in the mid 2000’s.

After the ballgame, Winchester’s Maddie Lawrence was recognized as the winner of the Gary Horner Sportsmanship and Mental Attitude Award. Horner, the longtime Falcon mentor, died in August 2008. The Winchester senior is the daughter of Gary and Amy Lawrence.