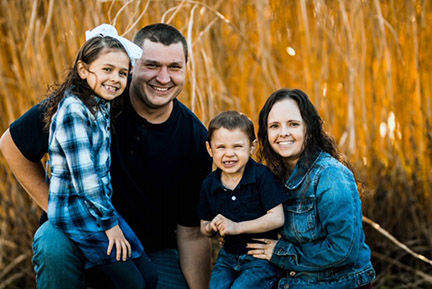 The Hill Family pictured from left to right are Jalynn 8, James, Jeremiah 4, and Janelle. Janelle was revived by physicians and staff of Strong Memorial Hospital at the University of Rochester after losing consciousness at a hotel while attending a youth group Bible quiz in New York. 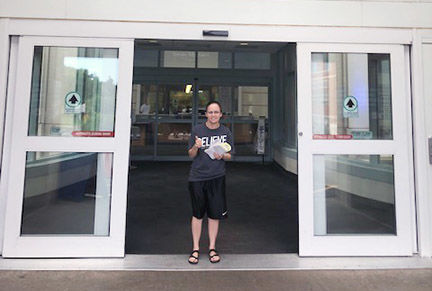 Janelle Hill leaves the hospital following her miraculous recovery. "People at church have teased me by comparing me to Lazarus," says the young mother of two. 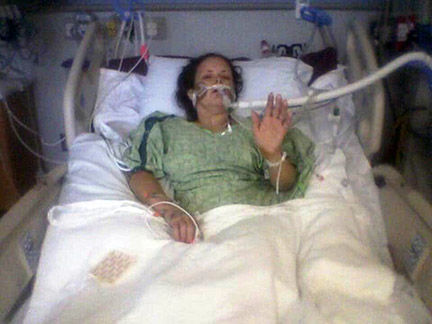 A shot from the hospital shortly after Hill began responding.

The Hill Family pictured from left to right are Jalynn 8, James, Jeremiah 4, and Janelle. Janelle was revived by physicians and staff of Strong Memorial Hospital at the University of Rochester after losing consciousness at a hotel while attending a youth group Bible quiz in New York.

Janelle Hill leaves the hospital following her miraculous recovery. "People at church have teased me by comparing me to Lazarus," says the young mother of two.

A shot from the hospital shortly after Hill began responding.

On July 28, a celebration of life was held for Janelle (Yaryan) Hill at the Wesleyan Church on Union Street in Winchester. Friends and family are relieved to have her alive and well, as they very well could have been having a much more somber service.

The young mother of two, and daughter of Wesleyan Pastor Randy Yaryan, Hill was attending a youth group Bible quiz in Houghton, New York with members of her church. She awoke in the middle of the night and was having difficulty breathing. Hill called her father and told him that she was dying. Knowing that she suffered from asthma, he responded “No, you’re not” as he proceeded to her room to assist her. When he saw her, he knew that she was in trouble. He laid her on the floor and found her nebulizer but it did not help. He began helping her towards the door of the building, as he called the authorities for help. They asked what building he was in and told him that they all had a name on the outside of the building. He went outside to see what the name was and the door locked behind him. Frantic, he called one of their friends inside for help. Hill saw her father outside and managed to open the door for him before she collapsed in his arms.

Staying on the phone with the authorities, as the ambulance was on its way, he began attempting to administer CPR. She was unresponsive and had no pulse, he could not see her chest rise when he blew into her mouth. Air was not going into her lungs. In a panic, he blew into her mouth really hard, which you are not supposed to do. As it turns out, her voice box had constricted and was cutting off her flow of oxygen. Luckily, the panicked breath of her father blew open her airway allowing the CPR to be effective.

Brain cells can begin to die and suffer permanent damage after as little as four minutes without oxygen and Hill had had no pulse or oxygen to her brain for 15 to 20 minutes. At one point, she had begun to turn blue. When they arrived at the hospital, the news was not good. Her carbon monoxide level was 138. The normal level is 30. This usually results in some level of brain damage and in the event that she managed to survive, she would likely never be the same. Her prognosis for survival was very low at this point. Pastor Yaryan repeatedly told the doctors “You don’t know the God I serve!”

The best hospital in the area for patients in this situation was about two-and-a-half hours away in Rochester, New York. Yaryan doesn’t know how far the ambulance ride to Rochester was but, “I saw a lot of deer.” It is unusual for a nurse to accompany a patient during a transfer, but the nurse insisted. Hill’s  vitals dipped a couple of times during the ride.

The situation was not looking good. Calls went out to family and friends for prayers. The news was posted on Facebook. Her brothers Randy and Jordan began the long drive to Rochester with their worried mother, Carole. Hill’s husband James also left for New York, fearing the worst.

Hill had lost consciousness around 1:30 AM. She remained unresponsive until around 7:00 AM when her father noticed her grin at a joke he had made. She squeezed his hand and indicated that she knew who he was. Before long, she began asking about her husband and children and work. James arrived about a half hour before they removed her ventilator. Her mother and brothers followed ten minutes later. All overjoyed that she was still alive.

The following evening, Pastor Yaryan brought his grandchildren to visit their mother. Four year old Jeremiah had been singing some church songs on the way to the hospital and told his grandfather that he wanted to sing one for his mother. The pastor responded, “OK but don’t cry.” Jeremiah sang the song for her and then quietly wiped away his tears in the corner of the room.

“When something like this happens you learn just how many really good people there are out there,” says Yaryan. The National Director of our group, Jim Terwilliger, provided me the local emergency numbers and stepped in to coach our team in the Bible quiz. Eight year old Jalynn helped to take care of her brother. James’ mother Crystal knew all of the medications that the kids took. Our friends Brenda and Jeff Swearingen were also a huge help. “We’d like to thank everyone for their prayers and the help that they provided in our time of need,” adds Yaryan.

Janelle has been diagnosed with Vocal Cord Disfunction, which is not uncommon, but frequently goes undiagnosed in cases with asthma. She is also recovering from biting the tip of her tongue during the episode. “I still have some issues with my left hand and foot, but everything else is fine. I’m pretty much back to normal, although my brothers might say differently,” she jokes. “Some of our church members have been teasing me comparing me to Lazarus,” she continues. “Jesus returned in three days. It took Lazarus four,” adds her father. “At any rate, we are all glad that she is still with us,” he continues. “It’s kind of like the country song by Kenny Chesney from a few years ago ‘Everybody Wants to go to Heaven, But Nobody Wants to go Now’.”

Green Bay bound: Get to know all 9 players picked by Packers in 2020 NFL draft

Get to know the Wisconsin Badgers' 2020 football recruiting class