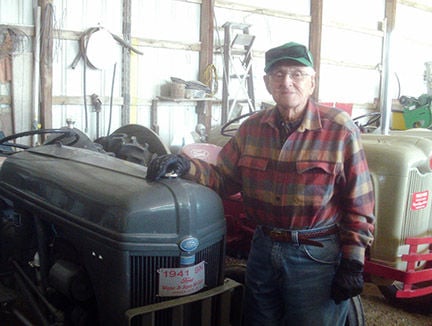 Wayne McGuire poses with his 1941 Ford tractor. One of three that were built. It is a sister tractor to one that his father showed him how to drive. 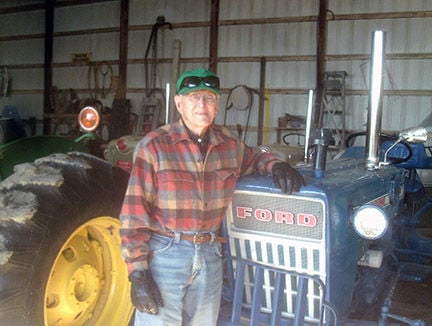 Wayne McGuire poses with one of his antique Ford tractors. 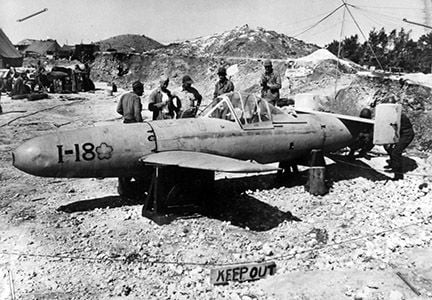 Okinawa Campaign Yokosuka, MXY7 Ohka, 1945. U.S. Marines examine a “Baka Bomber”, Japanese suicide rocket bomb on Okinawa’s Yontan airfield, where several of the craft were abandoned by the enemy when U.S. Tenth Army forces captured the enemy airbase. The rocket-propelled bomb is steered by a lone pilot who is carried to his death. Equipped with wings, fins and tail assembly, the craft were named “Baka Bombs” by American Soldiers. “Baka” means “fool” in Japanese. A few of the bombs were launched in the Okinawa operation and met with little success. U.S. Marine Corps Photograph, from the Office of War Information Collection, located at the National Archives. (2018/05/09). 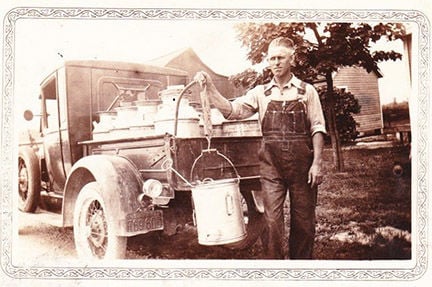 Wayne McGuire poses with his 1941 Ford tractor. One of three that were built. It is a sister tractor to one that his father showed him how to drive.

Wayne McGuire poses with one of his antique Ford tractors.

Okinawa Campaign Yokosuka, MXY7 Ohka, 1945. U.S. Marines examine a “Baka Bomber”, Japanese suicide rocket bomb on Okinawa’s Yontan airfield, where several of the craft were abandoned by the enemy when U.S. Tenth Army forces captured the enemy airbase. The rocket-propelled bomb is steered by a lone pilot who is carried to his death. Equipped with wings, fins and tail assembly, the craft were named “Baka Bombs” by American Soldiers. “Baka” means “fool” in Japanese. A few of the bombs were launched in the Okinawa operation and met with little success. U.S. Marine Corps Photograph, from the Office of War Information Collection, located at the National Archives. (2018/05/09).

Although he has lived his entire life in Randolph County, having lived in only three locations, local farmer Wayne McGuire has lived a very interesting life. Friendly and energetic, McGuire gets around quite well for a man who is nearly 95 years of age. He is still driving himself wherever he needs to go, and walks without the aid of a cane or walker. From the days of riding with his father, Neal, delivering cream, through his service during World War II, his experiences with automobile racing, his love of antique tractors, all while working on the farm, near Windsor, that has been in his family for over 100 years, McGuire has had a fascinating life.

He was born in Maxville and his earliest memories are living near the church where his father, Neal, was the caretaker for Woodlawn Cemetery. When he was five years old, his family moved to a house two miles south of the Orphan’s Home near Winchester. His father, Neal, got a job delivering cream for Schlosser Brothers, one of the largest manufacturers of dairy products in the state, in the Winchester area. He worked five days a week and had five different routes. The young Wayne enjoyed riding in the truck as his father made deliveries. He graduated from Lincoln High School which was the first rural 12 grade consolidated school.

Upon graduating, McGuire joined the Navy to undergo training to become a pilot. Not meeting the Navy’s standards to become a pilot, he became an aviation navigator and electrician and was sent to sea in the Pacific during the height of World War II. Most of missions that the ship he was on took part in involved ferrying aircraft from one location to another. He remembers the final mission he was on after the war ended. “ We had been ordered to bring back one of every type of aircraft that the Japanese had used during the war,” he recalls. “There are a lot of those aircraft that you never hear much about, like the Baka, a rocket powered bomb that was guided by a pilot,” he explains.

The Yokosuka MXY-7 Ohka, was nicknamed “Baka” by Allied troops. Baka is the Japanese word for “fool.” Ohka in the aircraft’s official name is Japanese for “cherry blossom.” The unusual craft was a manned flying bomb that was usually carried underneath a Mitsubishi G4M2e Model 24J “Betty” bomber to within range of its target. On release, the pilot would first glide towards the target and when close enough he would fire the Ohka’s three solid-fuel rockets, one at a time or in unison, and fly the missile towards the ship that he intended to destroy.

These were the aircraft used by the kamikaze, Japanese for “divine wind,” officially the Tokubetsu Kōgekitai were a part of the Japanese Special Attack Units of military aviators who initiated suicide attacks for the Empire of Japan against Allied naval vessels in the closing stages of the Pacific campaign of World War II, designed to destroy warships more effectively than possible with conventional air attacks. About 3,800 kamikaze pilots died during the war, and more than 7,000 naval personnel were killed by kamikaze attacks. The USS Mannert L. Abele was the first Allied ship to be sunk by Ohka aircraft, near Okinawa on 12 April 1945. Over the course of the war, Ohkas sank or damaged three ships beyond repair, significantly damaged three more ships, with a total of seven U.S. ships damaged or sunk by Ohkas.

The Ohka pilots, members of the Jinrai Butai (Japanese for Thunder Gods Corps), are honored in Japan at Ohka Park in Kashima City, the Ohka Monument in Kanoya City, the Kamakura Ohka Monument at Kenchō-ji Zen temple in Kamakura, Kanagawa, and the Yasukuni Shrine in Tokyo.

Upon his return from the war, in 1946, McGuire had a couple of part-time jobs in Winchester. One of these was selling Fords at a dealership. In 1947 he returned to life on the family farm on the Losantville / Parker Pike a few homes South of Windsor Road, where he has lived ever since. Over his many years on the farm, they have at one time or another raised most of the typical types of livestock that you might find on a farm. They have also grown most of the types of crops common to the area. In his time on the farm, he has experienced a great deal of change in the way things are done. “When I first started, we had one horse and a two row plow. The horse didn’t like it very much, and neither did I,” he laughs. “That horse was soon replaced by a tractor. When I decided to let my grandson take care of most of the farming a few years ago, we had huge tractors that were pulling plows that could do 12 or 24 rows at a time. You can get things done much faster now, but you have to cover more ground in order to be profitable,” heads.

He also vividly recalls the tornados on April 3, 1974. “That nearly wiped us out. Most of our family’s buildings were destroyed except for two houses. It took us a couple of years to recover from that.

It was on the farm where he fell in love with antique tractors. He is heavily involved with the Randolph County Antique Club. He has won numerous tractor pulls over the years, and was one of the club’s earliest members. He also helped to organize the club’s first tractor drive. Most of his antique tractors are Fords. He has a rare 1941 Ford that is one of three that were made.

One would not expect it, but another of McGuire’s interests is auto racing. In 1996, he drove a 1928 Ford Model A Speedster in the Great Race. The Great Race (formerly known as the Great American Race) is a classic rally for street-legal vintage automobiles at least 45 years old. Vehicles must use original factory parts, and modern navigational aids like GPS are prohibited.

This is a precision pace race, not a high speed race. Points are awarded on the accuracy of a driver and navigator to match a time and average speed over a predetermined course. Points are also awarded on a handicap system that awards bonus points to older vehicles. Prizes are awarded in several categories, including the “X-Cup” for high school teams.

The Great Race was organized by Texans Tom McRae and Interstate Batteries chairman Norm Miller. It was named for, and partially inspired by, the 1965 movie of the same name. The rights to the race were purchased from Howard Williams of Oklahoma City, OK in the early 80’s. Williams had earlier organized a race with two reproduction Stutz Bearcats in 1971. An inaugural race was held that year from Tulsa, Oklahoma to Indianapolis for the Memorial Day 500 race event. The first of its kind event, was sponsored by Tulsa-based Sunoco/DX, along with Goodyear Tires and Tulsa radio station KRMG. Coincidentally, the Sunoco sponsored car won the Indianapolis 500 that year.

Interstate Batteries first race was held in 1983, it is an annual event held over a 14-day period. The course usually runs from east-to-west or west-to-east on a 4000-mile journey across the continental United States. The course typically avoids large cities, instead winding along secondary highways and back roads through small towns in America’s heartland. While the towns that the course will run through are publicized in advance, the actual route itself is kept secret from the drivers and navigators. Each year, race organizers give the “Great American City” award to the town along the route with the most receptive audience. The race tends to be a festive and patriotic affair, with the streets lined with flags and marching bands playing.

When asked how he did in the race, he pauses a bit before recalling, “we had a stop in Missouri. I wasn’t feeling well and told the lady at the hotel desk. One of our team members took me to the hospital and as it turns out I was having a heart attack. I had to get a bypass. We switched drivers and the car finished third, but we got disqualified because you’re not allowed to change drivers.”

He has also had some success in racing as an owner. He has won three sprint car championships at the speedway in Gas City, Indiana, with John wolf as a driver. He would love to feature at the annual “Chili Bowl Nationals” an event involving 300 midget sprint cars on an indoor dirt track. He has had cars involved in the event but has never had one make it to the main feature.

McGuire, a Master Mason at the Parker Masonic Lodge, attends church at the United Methodist Church in Parker City. All of his immediate family lives within a few miles of the family farm where he lives with his dog Megan. Seeing him going about his business, one would not imagine that this unassuming farmer had lead such an interesting life. McGuire sums it all up with a quote that he remembers hearing from one of his neighbors, “I have everything that I need, and my wants are very few.

Considerable clouds early. Some decrease in clouds later in the day. Much colder. High 18F. Winds WNW at 15 to 25 mph.