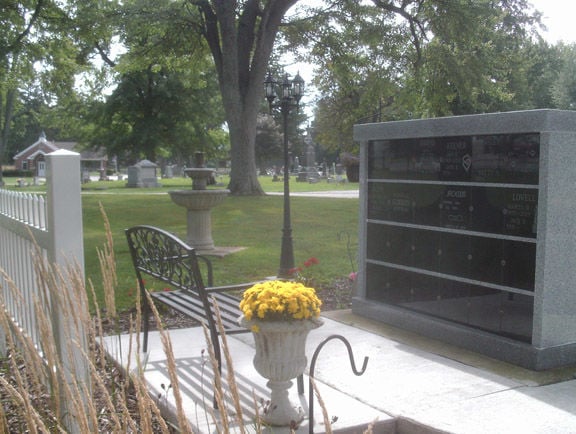 Winchester’s Fountain Park Cemetery recently livened up its columbarium with new lighting, benches, landscaping, and fencing creating a calm, and peaceful site to remember loved ones. 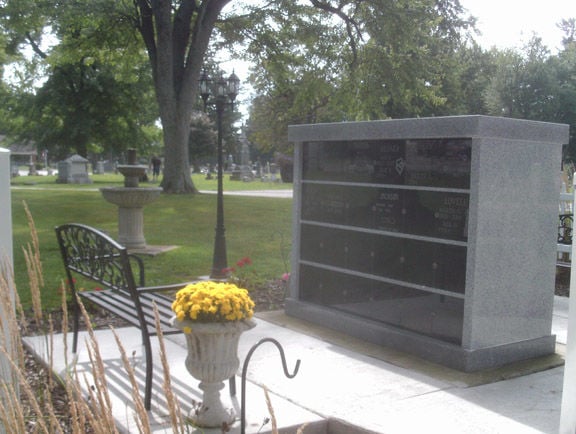 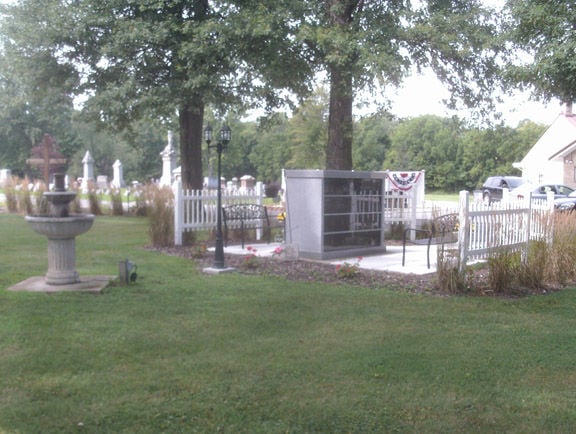 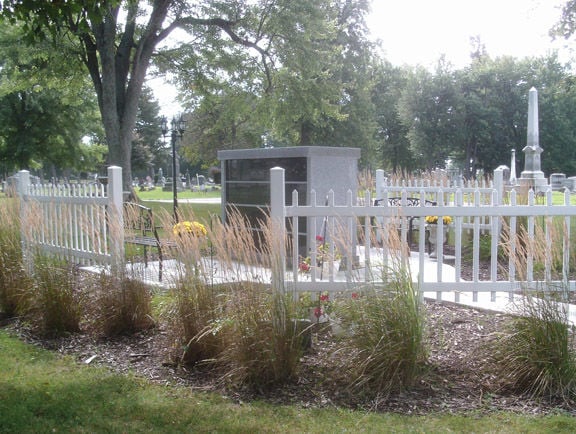 Winchester’s Fountain Park Cemetery recently livened up its columbarium with new lighting, benches, landscaping, and fencing creating a calm, and peaceful site to remember loved ones.

Winchester’s Fountain Park Cemetery has recently livened up the area surrounding its columbarium. Former Cemetery Board Member Larry Preston, himself a niche owner, reached out to other niche owners and lot owners at the cemetery for donations to allow for the improvements. The former stone path has been replaced with a sidewalk that connects to the cement around the columbarium which has been extended to provide space for a bench on either side of the structure. Cemetery Board Member Melisa Patterson led the effort to beautify and landscape the area adding the benches, fencing, flowers, and plants. They were also able to obtain funding to install a dusk to dawn light near the east end of the columbarium near the pre-existing fountain. The end results provide a calm, peaceful setting in which people can reflect upon the lives of loved ones placed in the columbarium.

Randolph County’s largest cemetery, Fountain Park, was designed, laid out, and donated to the people of Winchester by Civil War General Asahel Stone in 1880. Many bodies were moved to the cemetery from older cemeteries. General Stone’s father Ezra is among them. Many of notable citizens from Winchester’s past have been laid to rest in the cemetery throughout its history. Included among them are General Stone and his family, Governor James P. Goodrich and many of his family, and the grandfather of Indiana poet James Whitcomb Riley. There is also a grave marker for Revolutionary War soldier Zachariah Johnston, although he is actually buried on a farm south of Winchester.

The recent infestation of the Emerald Ash Borer took a toll on Fountain Park Cemetery’s tree population. “We lost a lot of trees,” says Mike Shannon. “We would love to be able to replace them,” he adds. “It cost quite a bit to remove those trees, and it will take some time to get the funds to replace them.” “You might think it would be better without them, but they absorb a lot of moisture and help to prevent erosion of the ground. Although care must be taken with where they are planted, there are a few tombstones in the cemetery that are being grown over by a tree that is too near,” Shannon states. The cemetery is funded primarily by proceeds from purchases of lots, niches and monuments, as well as donations, and any grants they may obtain. “A lot of work goes in to keeping everything maintained and looking nice. We are in the process of extending some of the paths on the south end of the cemetery, but it is a slow process depending upon available funding,” he continues.

A columbarium is a room or structure designed as a final resting place to house cremated remains. Columbaria are permanent structures with banks of cremation niches (similar to cubbyholes,but with secure fronts) that hold cremation urns. They were first used by the Romans. The ashes of loved ones were put in ornate urns and placed in sacred underground chambers, which were decorated with frescos and mosaics. The word columbarium is from the Latin term columba which means, “dwelling place of the dove.” A columba originally meant a sectional housing structure for doves and pigeons, what is now called a dovecote.

Cremation has become the new normal. In 2017, cremation surpassed traditional burial for the first time in the United States. That’s a huge milestone and marks a change in funeral traditions. In 1970, just 5 percent of people opted for cremation. The National Funeral Directors Association released a report in 2018 with very interesting statistics for the funeral industry. The cremation rate was predicted to reach 53.5 percent in 2018 with a forecast that the national cremation rate will reach 80% by 2035.The main reason people are choosing cremation is because it is a much cheaper alternative, costing a third as much as a regular burial.

Funeral costs have been rising steadily since the 1980’s. The average funeral costs between $7,000 and $9,000 or more. This includes viewing, burial, basic service fees, transporting remains to a funeral home, a casket, embalming, and other preparation. These costs do not include a cemetery, monument, marker, or other things like flowers. The average cost for a casket alone is $2,000 and, depending upon the materials used, can be much more.

Sing, speak, shake, repeat. This is every campaign rally

With this kind of financial expense, it is easy to see why more and more people are considering cremation as a more affordable option. An urn can cost as little as $10 or well over $2,000, depending upon the size, material and quality.  Tombstones start at around $1,000 for a small, very plain marker but those too can get quite expensive depending how ornate one wishes to go.

The cost of a niche in Fountain Park Cemetery’s columbarium is $1200 this includes the cost of etching names, dates, and any designs on the niche. Compared to the cost of a traditional burial, this is quite reasonable.

Considerable clouds this evening. Some decrease in clouds late. Low 16F. Winds NW at 10 to 20 mph.