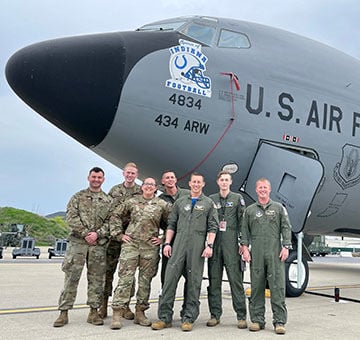 Pictured are the crew of the KC-135 from Grissom Air Reserve Base that took part in this year’s “Thunder Over Louisville” event. The three in camouflage are the ground crew chiefs. From left to right in the green flight suits are: J.T. Marshall, Chayce Baldwin, Dillan Addington, and Kelly Hardin. The show was special for Hardin as he grew up in Louisville. Photo submitted. 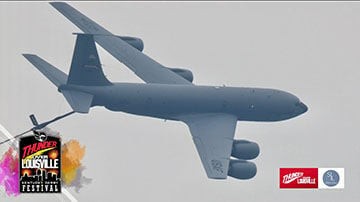 A KC-135 Stratotanker in flight with the refueling arm extended. Photo submitted.

Pictured are the crew of the KC-135 from Grissom Air Reserve Base that took part in this year’s “Thunder Over Louisville” event. The three in camouflage are the ground crew chiefs. From left to right in the green flight suits are: J.T. Marshall, Chayce Baldwin, Dillan Addington, and Kelly Hardin. The show was special for Hardin as he grew up in Louisville. Photo submitted.

A KC-135 Stratotanker in flight with the refueling arm extended. Photo submitted.

Staff Sergeant Dillan Addington has been in the Air Force for the past six years. Many in Winchester know his father Tom and Grandfather Charlie. Last month, Dillan had the opportunity to take part in “Thunder Over Louisville,” an air show and fireworks display that typically kicks off the Kentucky Derby Festival.

Normally, this event draws huge crowds. However, this year, the event was re-imagined. There were few if any spectators. The event was broadcast on television on local ABC affiliate WHAS-11 and streamed live to their website. Many acts took part in “Thunder Over Louisville.” They included the Kentucky Air National Guard and their C-130 Hercules Cargo Plane; a restored P-51 Mustang of the sort flown by the Tuskegee Airmen in World War II; the 2019 Air Show performer of the year, Matt Younkin performing both a day and nighttime show; a UPS Boeing 767; a World War II era Navy PVM Avenger; Army helicopters such as the CH-47 Chinook, the UH-60 Blackhawk, and the AH-64 Apache Gunship; and the Airforce KC-135R Stratotanker.

This base is home to the largest KC-135R Stratotanker wing in the Air Force Reserve Command (AFRC), of which Addington is a part, as well as units from the United States Army Reserve and also the US Marine Corps Reserve. The host unit is the 434th Air Refueling Wing (434 ARW), the “Hoosier Wing”, which consists of three major groups and a variety of squadrons and flights. The wing develops and maintains the operational capability of its units and train reservists for worldwide duty.

This is the first time in quite some time that a group from Grissom has been asked to fly in “Thunder Over Louisville.” The Boeing KC-135 Stratotanker is a military aerial refueling aircraft that was developed from the Boeing 367-80 prototype, alongside the Boeing 707 airliner. The KC-135 was the US Air Force’s first jet-powered refueling tanker and replaced the KC-97 Stratofreighter. The KC-135 was initially tasked with refueling strategic bombers, but it was used extensively in the Vietnam War and later conflicts such as Operation Desert Storm to extend the range and endurance of US tactical fighters and bombers.

Are voters in Wyoming loyal to Donald Trump or Rep. Liz Cheney?

Black police chief called 'sell out' by his own community

The KC-135 entered service with the United States Air Force (USAF) in 1957; it is one of six military fixed-wing aircraft with over 50 years of continuous service with its original operator. The KC-135 is supplemented by the larger KC-10. Studies have concluded that many of these aircraft could remain in service until 2030. The KC-135 flown in the show is a 1961 model and is one of the older planes still in service.

The show was a special bonus for another member of the crew of the KC-135! Kelly Hardin grew up in and around Louisville. Hardin was thrilled to be able to take part in the show in his hometown. “I thought that was pretty cool,” said Addington. “It’s not often we get asked to fly in a show like this and for it to take place in his hometown just makes it something special,” he added. “We were hoping to be able to simulate a refueling run, with some A-10 Warthogs, but they were unavailable,” stated Addington. “So we ended up doing several low passes with thet refueling arm extended,” he explained.

“Thunder Over Louisville,” began in the the summer of 1988 at a state park in Western Kentucky that housed the Kentucky Derby Festival Board and Staff for an annual planning workshop. It was already decided to have an opening ceremony.  It was here that the shape of the first opening ceremonies began to form. It wasn’t yet Thunder, but it was the very first Opening Ceremonies of the Kentucky Derby Festival. About 10,000 folks showed up. As the fireworks were going off, it was asked if it could be done at night. “Absolutely!” he replied. The rest is history.

What started as a better-than-average fireworks display has become the pinnacle of pyrotechnics. It is one of the nation’s largest annual fireworks events. It also is one of the top five air shows in the country. Thunder Over Louisville has made a lot of people happy, garnered international attention, entertained millions over its existence. Thanks to its sponsors, “Thunder Over Louisville” is a kick-off to a weekend like no other!

A mix of clouds and sun this morning followed by mostly cloudy skies and a few showers this afternoon. High near 60F. Winds WNW at 10 to 20 mph. Chance of rain 40%.

Some clouds this evening will give way to mainly clear skies overnight. Low 34F. Winds NNW at 10 to 20 mph.

PHOTOS: Barber goes from $5 fades in his grandma's Hammond kitchen to cutting the hair of White Sox stars

15 new movies you can stream this month