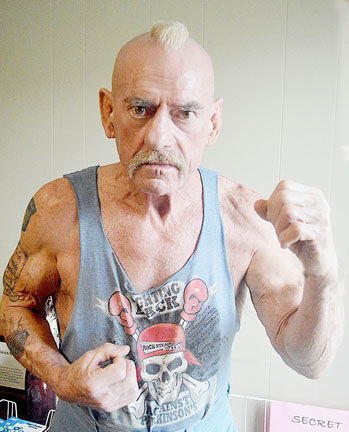 Al Hughes, a 1968 graduate of Selma High School, will enter the boxing ring at 70 years old on Dec. 14 at the Tyndall Armory in Indianapolis. It will make him the world’s oldest living boxer by a decade. 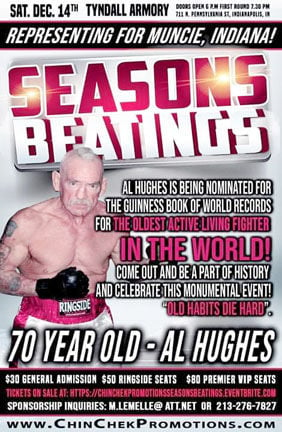 Al Hughes, a 1968 graduate of Selma High School, will enter the boxing ring at 70 years old on Dec. 14 at the Tyndall Armory in Indianapolis. It will make him the world’s oldest living boxer by a decade.

Historic fight is set for Dec. 14 in Indianapolis

Al Hughes has an upcoming date with destiny – one that, once fulfilled, will leave his name inscribed in the book of boxing legends.

At 70 years old, the headstrong 1968 graduate of Selma High School is determined to be the oldest fighter to ever enter the boxing ring. His fight  is the 11th bout on the Dec. 14 card at Tyndall Armory in Indianapolis.

Hughes’ opponent is a bit more than half his age, at 42. The fight is scheduled for four rounds.

“It kind of started out as a lark, but after my son died I promised him I would do this for him,” Hughes said. “It’s not about me or any fame or fortune or glory or any pat on the back. I’m doing this to honor my son.”

Al Hughes, Jr., battled drug addiction and died of apparent suicide in April of this year. He appeared to be on his way to recovery, excelling in his classes at Ivy Tech and training as a boxer himself.

“Big” Al took his son’s death hard and has made it his mission to enter the Guinness World Book of Records as the oldest living boxer. A portion of the proceeds from his historic fight will be donated to the American Foundation for Suicide Prevention.

Hughes would shatter the previous record for the oldest fighter. Steve Ward of Manchester, England was 60 years old when he fought in 2017.

“This is an historic event. No one in the 5,000 years of written history has ever done what I’m going to do. But it’s got to be done. I’ve got to do it, and I’m going to do it for my son,” Hughes said.

Hughes started his boxing career at 15 at the Muncie Pal Club before serving in Vietnam. Once he returned, he resumed his boxing career and was quite successful over a span of about 80 fights, noting that he has won most of his matches and has “never been knocked out.” He won his pro debut on April 17, 1975.

Steyer: Bloomberg has got to embrace wealth tax

Asked about the worries of entering a ring at the age of 70, Hughes scoffs and says he’s unafraid.

“I’m not afraid of anyone. Naturally I want to win, but mostly I want to walk out of the ring on my feet and be able to go over to my family and friends and tell them I did it. But I expect a knock down, bloody mayhem.”

Hughes will have his physician Dr. Oscar Ordonez of Parker City in his corner as well as his brother-in-law Mike Moles, who has been his trainer.

Tickets for the event are on sale at https://chinchekpromotions.com

Cloudy early with peeks of sunshine expected late. A few flurries or snow showers possible. High around 20F. Winds WNW at 15 to 25 mph.

Considerable clouds this evening. Some decrease in clouds late. Low 16F. Winds NW at 10 to 20 mph.